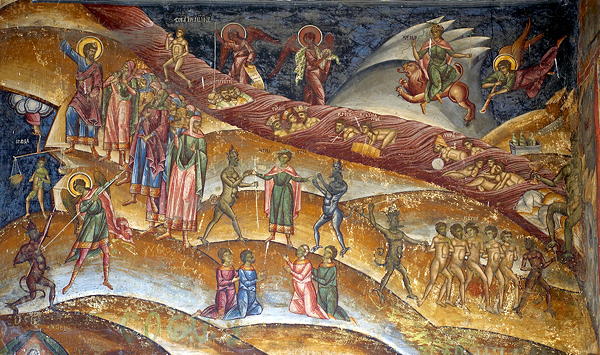 Dante gazes at purgatory (shown as a mountain) in this 16th-century painting. The book he holds is a copy of the Divine Comedy, open to Canto XXV of the Paradiso.

It is curious to many why Jesus had to die on the cross. Naysayers find it disingenuous for a loving God to flay his only begotten Son and then watch him die by crucifixion.

Consider for a moment the way our court system handles criminal justice. The accused stands before a judge. His defense pleads his case, while the prosecution outlines the evidence for his guilt. If found guilty, and then sentenced to jail, the convicted person often has a period of probation that sometimes follows an early parole release.

However, the legal system still views the probation as part of the sentence. While the convicted person is “free” in the sense that he is not incarcerated, he is still not really free. He is serving probation as a further penitence beyond incarceration. One eye of the judicial system watches for probation infractions while the other peers hopefully toward a change in character. One slip-up by the convicted person, and back to jail he can go.

Just like public justice, personal justice can also have probation.

Does your child, your wife, your husband, or your parent ever get angry with you? Maybe you get angry with them? Does it take a while for that feeling of anger to fade? Do you or they take a while to get back to that pre-event relationship which an offense and emotion take away, all the while not removing them from that sphere of personal interaction?

The offended has become the punisher, and the offender is condemned to probationary purgatory until the offended is satisfied to release them.

Moreover, most of us have been both the offended and the offender. We who punish others by relegating them to probationary purgatory have also spent time there ourselves.

Contrast the definition of grace—God’s grace, that is. His grace means unmerited favor. He knows that our sinful nature assures as much as guarantees permanent, probationary purgatory. Does God demand a “pound of our flesh” from prodigal men who have abandoned him?

Grace is not a substitute for justice. Rather, it works through justice, not around it. If God simply “let us off,” then nothing about our corrupt nature will ever change. God’s justice and God’s mercy never conflict. He is completely just and completely merciful at all times. God’s solution is brilliant, and it shows why we call him God.

Justice only requires the conviction of one man, among men, to save all men. The nature of God’s justice requires that one man to be blameless, i.e., he cannot be deserving of the conviction. Were there to be no such man to stand for all men, then all men would remain prodigal from their creator God.

What God does instead ensures that there is a man that can stand for all men. This man is the Son of God, one of the three persons of God, born to a woman. Only this way can God write himself into our material story. God’s justice then can be born by an undeserving man who is himself God.

Absolute justice and absolute mercy results. While God was “pleased” to condemn Jesus, it was not the same way we think of being pleased. His solution to our prodigal state was far better than men who love probationary purgatory.

God’s Son can only die when he says “it is finished.” He himself has the power to take up his life again, which is why he prophesies he would be dead for three days, then rise again.

Not only will all men be spared God’s justice if they accept God’s Son as a substitute for them, but he eliminates probation altogether. He never says, when we sin, we must do penitence in order to be fully forgiven as we accumulate our life’s daily transgressions. His pleasure comes not only because his perfect nature prevents the consequences of our separation from him, but it restores us immediately and completely even as we trespass. God has no probationary purgatory.

God’s forgiveness works like this. Put a quarter in front of you and take a marker and write on one side “my forgiveness.” Now turn the coin over and think of all those who have offended you as you write on the other side “their forgiveness.”