A Day & A Thousand Years

“Twenty-four hours is one day, Dad!” she exclaimed.

Several times over the years I’ve had this discussion with my daughter Andrea about what the word “day” meant in Genesis chapter one. She feels adamant this refers to the same twenty-four hour period as we experience it today. Indeed, many Christians hold to the same view, and there is nothing wrong with this. I’m pointing to the scripture in Peter that reads as follows.

Reading this still failed to satisfy Andrea. To her, one day still meant twenty-four hours, period.

Still, her words nagged at me. For years I’ve thought about this with good reason. You see, even if that day in Genesis was really a thousand years, one still can’t account for the presence of animal fossils long since gone which are also apparently very old. What about the other evidence such as deep ice cores suggesting the earth is far older than the Genesis account would suggest? It is certain that geologists and paleontologists love to one-up each other by suggesting ever older dates and ages for the strata and fossils they study. Questioning the accuracy of carbon dating seems far less important whether the Genesis account of creation is literally true or not.

Recall the twin brothers one of whom was an astronaut. Remember now how time shrank as the astronaunt brother sped faster and faster until it vanished altogether at the speed of light. This is very, very important.

Around 2005 with around twenty years medical practice under my belt, I decided to take both semesters of freshman astronomy. My major was Chemistry with a minor in Biology and a strong interest in math and physics. Now I’ve already demonstrated clearly how the Big Bang matches with the Biblical creation description of light. All matter came from that single point of light, and light is pure energy.

Now, I was astonished in that astronomy course when the professor said that the universe expanded from that singular point of light into the material universe which is 95% of the size it is today in far, far less that even a billionth of a second. The proof of this is found in the cosmic background microwave radiation that today present in all directions and at the same intensity. The only way that could happen is if the universe and the light from the singularity expanded at the same time.

This expansion was not like the space of universe was present already and then the light shown into it. Space, time, and light expanded together from the singular point of creation. It wasn’t as like a balloon expanding as air was blown into it, but rather a balloon pulled evenly from every outside point on its surface as though space and time and matter were drawn into their being.

Light was present at all points and at all times, and that’s why its leftover microwave cosmic radiation is everywhere just as Panzias and Wilson observed. And this background radition is the same temperature, or strength of a faint 3 Kelvin which proves that the expansion was uniformly a mix of matter and light. To refresh your memory, 0 Kelvin is absolutely where there is no heat or even any vibration of atoms in space. Everything is perfectly still with no motion.

As the hands of God pulled space and time and light into being, he converted some of the pure energy of light into matter. Energy equals matter and matter equals energy as Einstein discovered.

Even more mind blowing is that the rate of expansion of the universe was faster than the speed of light. What that clearly means is that the physics in place during that expansion was not the physics of our present universe. That billionths upon billionths upon billionths of a second ithe expansion of the universe was stretched into the nothingness at a speed faster than the speed of light. The relative speeds of each point in space means that countless aeons of time could have occurred during that expansion at any particular point in the universe.

If the Earth is 4 billion years old the way science states it, then remember that by the time the universe had reached 95% of its present size, it was already in existence for 3.8 billion years. In other words, time on earth then was not as time is now. It was greatly dilated. But the expansion of the universe wasn’t like a light switch. Time didn’t just change to what we experience now when it reached that 95% mark. The truth is that we don’t know how time was affected for us in that last 5%. My supposition is that the expansion of the universe could have still been in progress to some degree even in the time of Adam. Perhaps that accounts for the fact that these men seemed to live long, long times compared to today?

What this means is that all the gelogic aging we see in the Earth had plenty of time to occur because the universe was expanding so fast. It is still expanding, in fact, but just not at the rate it was. The critical mass of the universe is the mass the universe would have to have in order for gravity to reverse this process and cause everything to shrink back to that initial singular point of the Big Bang. Calculations from repeated observations have shown there is not enough matter in the universe to reach that critical mass. The universe will go on ever expanding, but remember it is not like a balloon with air being blown into it. It is like a balloon which is being drawn into an ever-increasing space, time, and matter.

So what about carbon dating? Carbon which normally has six protons and six neutrons can have up to eight neutrons. This is carbon-14 and it degrades over time to the more stable carbon-12. The rate of this aging is consistent however with the rate of the passage of time at any particular point in the expansion of the universe.

So if we say that carbon dating of anything in particular that goes back aeons of years, have we really said anything? The assumption is that the rate of the passage of time back in those aeons where carbon was aging is the same as today. But that is a fallacy. We cannot equate the passage of time anytime in the far distant past like we would think of it today. Remember that the closer you get to the speed of light, the slower time goes. The universe was expanding far faster than the speed of light. We have no way of knowing what the physics of the universe were then, and we have no way to judge what that carbon dating would actually mean in today’s terms.

So is carbon dating useful at all. Only in recent history, and I suspect that means in serveral thousands of years would carbon dating be useful. Those scientist opposing a creation worldview like to use fantastical carbon dating years to pound away at a creator are leaving this fact out. It makes their argument smoke and mirrors, and it reveals that their worldview is biased against God rather than being objective observation.

Everyone, even those who try to begin objectively, end up making a biased worldview choice based on what they believe in their heart.

On a final note, I want to address the mathematics of 2 Peter 3:8. Specifically,I wanted to know the calculated percentage of the speed of light when put 1 day and to 1000 years which is 365,256.36 days, which is a thousand years, into the time dilation equation. It turns out that while we experienced 1000 years of time for an object that experiences the passage of only one day must the traveling at 0.0.999999999992 % of the speed of light. In other words, God not only is light philosophically, but the physical nature of light proves the timelessness of God. 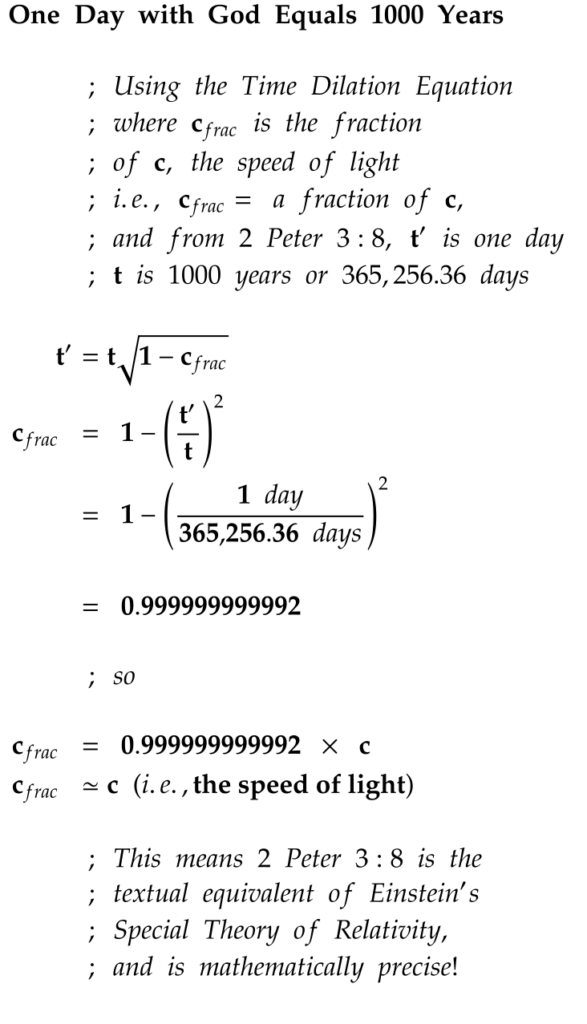